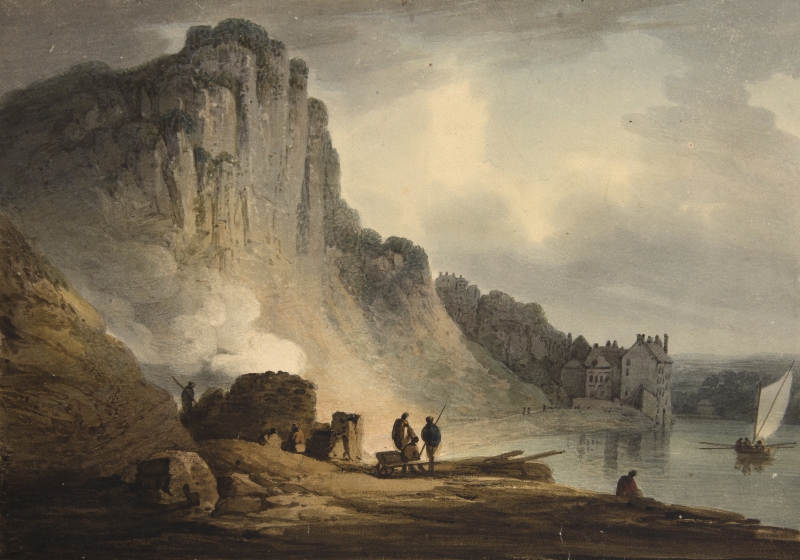 ﻿Now within the boundaries of Bristol, St Vincent’s Rock (or Rocks) comprises one of the most prominent landmarks on the Avon gorge. It is named after the medieval hermitage and chapel of St Vincent, which was recorded by William Worcestre in 1480 as being ‘on a most dangerous rock called Ghyston Cliff, in a deep place of the rock twenty yards in depth in the said rock above the river Avon’ (Frances Neale (ed), William Worcestre: The Topography of Medieval Bristol, Bristol Record Society, 2000, Page 227). The rock contains not only a cave, which was possibly the site of the hermitage, but also quartz crystals, known as ‘Bristol Diamonds’, and a warm spring. By the 1690s, the spring water was considered to have such curative properties that a pump room with lodgings was built below the rocks and close to the river. Called Hotwell House, this gave its name to the area of Bristol still known as Hotwells. For more than a century, it attracted invalids and other visitors who, at the same time, would often acquire Bristol Diamonds as souvenirs. However, by the 1820s, interest in the spa was beginning to flag, as many of its former clientele preferred to stay in the elegant new terraces built in Clifton on the hill above. The construction in 1822 of New Hotwell House failed to halt the spa’s decline. The development of the aesthetic categories of the Sublime and the Picturesque during the eighteenth century made St Vincent’s Rock a popular subject for many artists and writers; they included those involved in the compilation of guide books and topographical volumes, such as that for which Francis Nicholson produced the present image. The local artist, William West, even settled on the rock in 1828, transforming a disused windmill into an observatory, and later creating an underground passage to connect it to the cave. The view was changed irrevocably in 1831, with the construction of Clifton Suspension Bridge.

More by this artist

Please login or create your Beetles Account in order to add this artwork to My Beetles Wall.
Login

Rudding House, Yorkshire the Seat of the Rt Hon ...