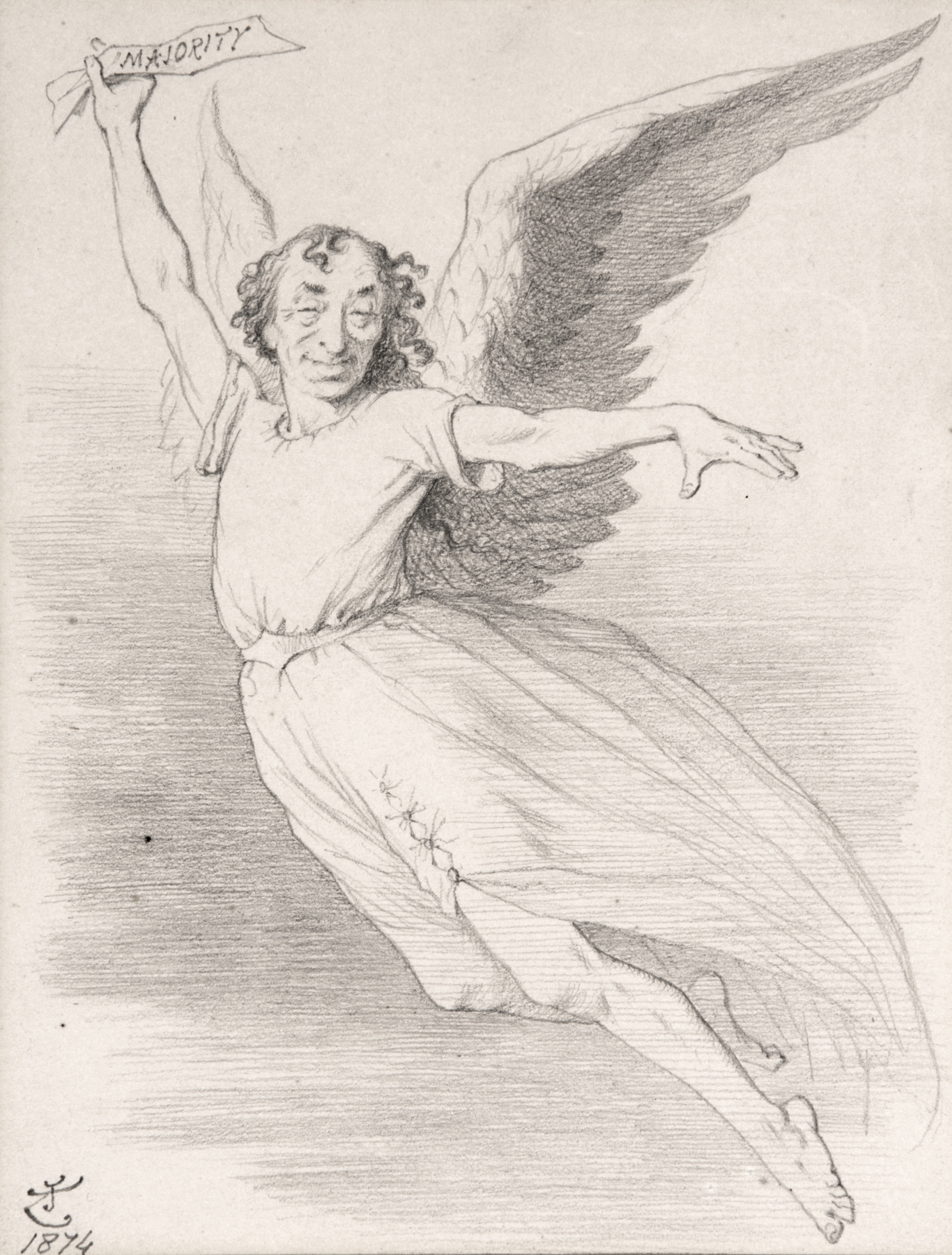 
Paradise and the Peri 'Joy, joy for ever! My task is done – The gates are passed, and Heaven Is won!' Lalla Rookh

The present cartoon celebrated the election of Benjamin Disraeli as Conservative Prime Minister on 20 February 1874. Though it marked the beginning of a second ministry that lasted until 1880, it was the first time that he had gained his position as the result of a general election. On the previous occasion, in 1868, he had taken over from Lord Derby while the Conservatives were in power, and then lost the general election to William Gladstone later the same year. This loss was mainly due to his introduction of the 1867 Reform Act, which was intended to help the Conservatives by doubling the number of adult males eligible to vote, but had the opposite effect.

The title of the cartoon,

Paradise and the Peri, and the accompanying quotation allude to Thomas Moore’s Oriental romance, Lalla Rookh (1817). Tenniel illustrated an edition of the poem, published by Longman in 1861, and based Disraeli’s pose in the cartoon on a particular image in that volume. The poem was highly popular throughout the nineteenth century, and cited by Disraeli himself in some of his novels, including The Young Duke (1831) and Consingsby (1844). It also inspired a number of works of music. The most famous of these is the oratorio by the German composer, Robert Schumann, which was composed in 1843 and received its English premiere in 1856. However, at least two native composers also wrote responses: Sterndale Bennett producing a ‘Fantasia-Overture’ (1862) and John Francis Barnett a cantata (1870). All three received regular performances during the early 1870s.


Paradise and the Peri concerns a ‘peri’, a winged spirit of Persian mythology, who is trying to regain entrance to Heaven by bringing it a cherishable gift. The peri is admitted when it offers a tear from the cheek of a repentant old sinner who has seen a child praying. In the verses that accompany Tenniel’s cartoon, Disraeli enters ‘Downing Street Heaven’ by offering ‘Ballot, and Bible, and Beer!’

Tenniel’s cartoon was not the first to represent Disraeli as a peri, or to link him to the precise quotation from Thomas Moore, ‘Joy, joy for ever! My task is done’. Another appeared seven years earlier, in the issue of

More by this artist

Please login or create your Beetles Account in order to add this artwork to My Beetles Wall.
Login

Silencing the Trumpet (After Aesop) Fenian ...

The Political 'Wall-Flower'! Miss Bright: 'Nobody ...

The Telephone Cinderella; Or, Wanted a Godmother

Mr Punch Jumps Through a Hoop

'Swag!' Or, the Political Jack Sheppard