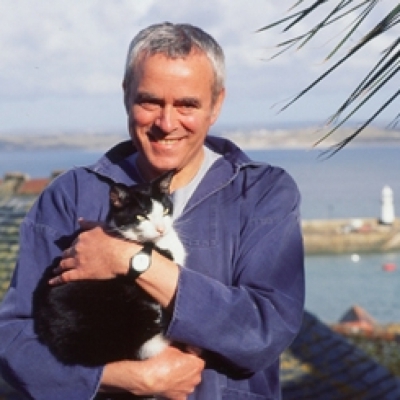 
While Michael Foreman is perhaps best known as one of the most outstanding contemporary creators of children’s books, he is a wide-ranging artist, illustrating literary classics and working as a painter.

Michael Foreman was born on 21 March 1938 in the Suffolk fishing village of Pakefield, the third son of Walter Thomas Foreman, a crane operator, and Gladys Mary Foreman (née Mace), a shopkeeper.

He was educated at Pakefield Primary School and then the Alderman Woodrow Secondary Boy’s School, before enrolling as a full-time student at Lowestoft School of Art in 1953. During his time at Lowestoft he continued to help in his mother’s shop and deliver newspapers, as well as having a holiday job in the local Birds Eye factory. He also began to publish cartoons and drawings advertising Morlings music shop in the Lowestoft Journal. In 1958, he left Lowestoft with a NDD in Painting and moved to London, spending a year studying Commercial Art at St Martin’s School of Art, under Joe Tilson. Michael Foreman settled first in Hampstead in 1959, and then in Soho the following year.
In 1960, he studied Decorative Graphics at the Royal College of Art, under Edward Bawden and Brian Robb, but was drawn to the Painting students, and produced abstract paintings. He graduated in 1963 with first-class honours. During his time at the Royal College of Art, he held the first solo show of his work, at the Queenswood Gallery on Archway Road in 1960, and published his first book,

Upon his graduation from the Royal College of Art, Michael Foreman was awarded the Silver Medal for Authorship and Illustration and a travel scholarship to the United States. He travelled and drew all across the country, contributing to numerous American magazines. He returned to London later that year and set up the design group, 3ink, with two friends, the designer, Dave Chaston, and the photographer, Roy Giles, and produced covers for Penguin. Between 1963 and 1965, Michael worked as a part-time lecturer at St Martin’s School of Art, whilst also working as a sketch artist for the Metropolitan Police and contributing regularly to the Sunday Mirror and the Observer. In 1965, he began work as a freelance illustrator on the women’s magazine,

Nova. Later that year, he returned to the United States for four months, living in Chicago and working as an art director at Playboy.

The following year, he returned to London as illustration editor of

King magazine, where he worked alongside his two partners at 3ink. At King, Michael Foreman produced all the illustrations, in a variety of styles, often using a number of pseudonyms. During this period, he also began contributing to The Sunday Times magazine and worked as a part time lecturer at the London College of Printing. He also returned to book illustration, publishing two new picture books to his own texts, The Perfect Present and The Two Giants. Between 1967 and 1969, he began collaborating on a number of projects with the BBC, working with Jannik Hastrup on six short animated films (also broadcast on Danish television), including those based on The General, The Great Sleigh Robbery and Horatio. He also illustrated Leslie Pitt’s ‘Maurice the Mouse’ stories for the BBC Two programme, Play School. From 1968, he also began lecturing part time at the Royal College of Art.

In 1970, Michael Foreman undertook the first of several assignments for Pegasus, the house journal of Mobil Oil. This would mark the start of a period of extensive travel, beginning with a three-week journey on the Trans-Siberian railway. Over the next seven years, Michael would also travel to Nigeria, Indonesia, Fiji, New Mexico and Australia. In 1972, he was invited by the Queen of Sikkim to visit her country and help with a collection of Sikkimese tales, published a decade later as

Land of Dreams (1982). In 1971, he began contributing to The Illustrated London News and the following year spent time working as a part time lecturer at the Central School of Art and Design. Between 1974 and 1978, Michael Foreman illustrated various stories for the BBC One television programme, Jackanory, along with Freire Wright, including Betsy Bryars’ The Eighteenth Emergency (1975) and After the Goat Man (1976), Nicholas Stuart Gray’s The Edge of the Evening (1977), and Gertrude Mittelman’s adaptation of Tales from Arab Lands. In 1977, on discovering that he had purchased what was once John Hassall’s School of Art at Stratford Studios, he further followed in Hassall’s footsteps by becoming a member of the London Sketch Club.

In 1980, Michael Foreman met Terry Jones, beginning a collaboration that started with

Fairy Tales (1981) and has since spawned a number of subsequent books. In December of that year, Michael married Louise Phillips, and together they would have two sons. In June 1985, he was appointed Royal Designer to Industry. The following year, his book, Dinosaurs and all that rubbish was made into a musical play by David Wood. It was commissioned by Howell’s School, Denbigh, Clwyd, North Wales, and first produced by the pupils of the school, being subsequently performed at Sadler’s Wells and other professional theatres. In 1989, Michael was named an Honorary Fellow of the Royal College of Art, where he had continued to lecture intermittently until 1981.

From his first children’s book, The General (1961), Michael has treated his young readers as responsible and mature. This attitude of concern has made him a great original and has resulted in many honours.

Since his first award in 1962, the Gimpel Fils Prize for painting, Michael Foreman has been decorated with a large number of honours. These include the Aigle d’Argent ‘Art et Techniques du Livre’ at the Nice Festival International du Livre (1972), the V&A’s Francis Williams Memorial Prize in 1972 for The Great Sleigh Robbery (1968) and Horatio (1970), and jointly with Charles Keeping and John Lawrence in 1977 for War and Peas (1974) and Monkey and the Three Wizards (1976), the Graphics Prize at the Bologna Children’s Book Fair (1982 for City of Gold), the Kurt Maschler Award (1982 for Sleeping Beauty and Other Favourite Fairy Tales), the Kate Greenaway Medal (1982 for Long Neck and Thunder Foot, 1983 for Sleeping Beauty and Other Favourite Fairy Tales and 1989 for War Boy), the Kinder Jury Gold Award from the Provincie Limburg, Holland (1987) and the Nestlé Smarties Book Prize Gold Award (1993 for War Game).

In 2002, his book, War Game, was made into an animated short, directed by Dave Unwin. It won numerous awards, including: the Children’s Choice in the British Animation Awards; the Pulcinella Award for Best Production of the Year, Cartoons on the Bay, Italy; the Golden Butterfly Award – Best Short Film, International Festival of Film & Video, Iran; Animation Category, Tokyo Kinder Film Festival, Japan; Best Television Special, Annecy International Animated Film Festival, France; Grand Prix du Festival, Bourg-en-Bresse Festival, France; the Student Jury Award at the Banff Television Festival (all 2002); Unicef Prize at the Cairo International Film Festival for Children (2003). In 2004, his book, The Little Reindeer, was made an animated short, directed by Dave Unwin. It won the Children’s BAFTA for Animation in 2005.

Michael has held numerous solo exhibitions of his work in both in the UK and internationally, including in Paris, New York, Japan and Santiago, Chile. Between October 2009 and June 2010, the exhibition ‘War Boy: The Michael Foreman Exhibition’, was held at the National Army Museum, London. In 2015 and 2016, the major solo exhibition ‘Painting With Rainbows’ was held at Seven Stories, the National Centre for Children’s Books, Newcastle upon Tyne, before touring to The Harris Museum, Art Gallery & Library, Preston (2016) and Chatham Historic Dockyard Maritime Museum (2017).

In 1990, he had his first selling exhibition at Chris Beetles Gallery, ‘Michael Foreman’s World of Fairy Tales’. This was followed in 1998 by ‘Michael Foreman – A Celebration’ and, most recently, the hugely popular ‘Michael Foreman: Telling Tales’ in April 2017.

Michael finds regular inspiration in Cornwall, where he lives when not in London.

His work is represented in the collections of the V&A.

Suddenly Tembo emerged from the river below him. ...

The next morning, the river was rushing and ...

In the next days and weeks, the little elephant ...

At first the baby elephant was frightened when he ...

Dad told Noa about the hunters who shot elephants ...

Most of all, Noa loved to watch the mother ...

Noa loved being on the river

He liked to watch all the amazing animals ...

The bugler was walking alongside her. "You ...

But this morning there were not many soldiers ...

And then one morning, the Christmas after you were ...

My name is Martens Merkel

"Tommies" the soldiers were always ...

Mama looks after the calves and the poultry, and ...

The River and Me [III]

Hens and Roosters [I]