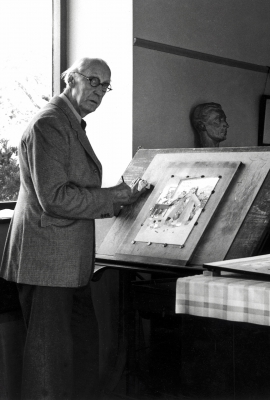 Lawson Wood was an accomplished cartoonist, illustrator and poster designer. He gained great popularity with his humorous illustrations of animals, including dinosaurs and monkeys. The ginger ape, Gran’pop, proved a particular favourite on both sides of the Atlantic.

Lawson Wood was born at 66 Woodsome Road, Dartmouth Park, London, on 23 August 1878, into a notably artistic family. He was the eldest child of the landscapist, Lewis Pinhorn Wood, and his wife, Louisa (née Watson), and the grandson of the architectural painter and printmaker, Lewis John Wood. He grew up with his family at Burnside, Shere, near Guildford, Surrey, and later at 51 Homefield Road, Chiswick, and was privately educated.

Wood received lessons in art from his father before studying intermittently in London at the Slade School of Art, under Fred Brown and Henry Tonks, and then at Heatherley’s School of Fine Art.
He also attended evening classes at Frank Calderon’s School of Animal Painting, Kensington.

In 1896, at the age of 18, Wood joined the periodical publisher, C Arthur Pearson, working there for six years and eventually becoming its chief staff artist. While there, he met his future wife, the fashion artist, Charlotte Forge. They married in 1903, settled at Bedford Park, and had three children. The youngest was born in 1911, after the family had moved to 15 Albert Road, Bexhill, Sussex. In the following year, they settled at Court Lodge, Groombridge, near Tunbridge Wells, Kent. This was an untenanted mediaeval manor house that Wood had decided to transfer from its original position in Udimore, Sussex, engaging the architect, John D Clarke, and the historian, J E Ray, to supervise the operation.

Working in a freelance capacity from 1902, Wood became an accomplished poster designer and drew cartoons for a number of periodicals, including

The Bystander, Fry’s Magazine, The Graphic, Nash’s Magazine, Punch and The Strand Magazine.

Among a range of subjects, he developed E T Reed’s novel idea of using prehistory as a subject for humour, in such series as

Prehistoric Proverbs (published in volume form in 1907). He showed examples of his comic work, in 1906, in a joint exhibition, held, with his father and grandfather, at the Modern Gallery, London, and then, in 1908, at a solo show at the Brook Street Art Gallery. A close friend of the cartoonist, Tom Browne, he joined him briefly as a member of the London Sketch Club.Wood also produced more serious work, which he showed as a member of both the Royal Institute of Painters in Water Colours and the Old Dudley Art Society (becoming Vice President of the latter).

In 1915, a year after the outbreak of the First World War, Wood volunteered and, following training for the Army Service Corps at Aldershot, obtained a commission. Soon after, he became an officer in the Kite Balloon Wing of the Royal Flying Corps. During the battle of Vimy Ridge in April 1917, he sat high above the action and helped the allied artillery spot German strongholds. As a result, the French decorated him for his gallantry.

Despite active service, Wood still found time, in 1916, to set up a toy company in collaboration with his architect friend, John D Clarke, at premises in Commercial Road, Eastbourne. Made to his own designs, the toys became known as ‘Lawson Woodies’. In the same year, the publisher, Frederick Warne, also launched him as a writer and illustrator of children’s books, with the ‘Mr’ series.

Following the end of the war, Wood and his family settled at Old Tokefield, Cranleigh, Surrey, a house that his friend John D Clarke created out of three cottages. The village had become something of a colony of illustrators, providing as it did at various times a home to Stephen Baghot De La Bere, Edmund Dulac, Bertram Prance and William Heath Robinson. Like Robinson, he contributed to Percy Bradshaw’s series of publications, ‘The Art of the Illustrator’, and also worked as a tutor for Percy Bradshaw’s correspondence course, the Press Art School.

Wood collaborated briefly on cartoons with Keith Sholto Douglas, under the joint name of ‘Hustlebuck’. Douglas’s first wife, Josephine, worked as Wood’s secretary (and she gave birth to Douglas’s son, also called Keith, who became the most noted English poet of the Second World War). Douglas’s second wife, whom he married in 1941, was Wood’s daughter, Phoebe.

In 1923, Wood sold Old Tokefield to the novelist, Frank Swinnerton, and left Cranleigh, probably for Eastbourne, which certainly became his home by 1928. It seems that his wife, Charlotte, filed for divorce in 1929. During the following decade, he became a good friend of Ethel Webb, who lived at East Dean, just to the west of Eastbourne. Together, they created a sanctuary for badly treated horses, and this contributed to Wood’s election as a Fellow of the Zoological Society in 1934. His work was always based on close observation of animal appearance and behaviour, which was informed by visits to London Zoo and the local zoo at Wannock Gardens, Polegate, and also by the animals in his own small menagerie.

Already famous, Wood gained international popularity with his humorous illustrations of animals, and especially the ginger ape, Gran’pop, who made his first appearance in

The Sketch in 1932. He mounted solo shows of his comic art across Britain and, holding strict control over his copyright, sold reproductions of his images throughout the world. He became so successful in America that, in 1939, the animator, Ub Iwerks, who had helped Walt Disney to create Mickey Mouse, planned to produce 24 cartoon films featuring Gran’pop; however, the project was interrupted by the Second World War, and only three were completed.

Wood was already living with Ethel Webb at Ringwood Farm Cottages, East Dean, when, in 1942, his own house, in central Eastbourne, was destroyed by enemy bombing. Following the end of the war, he continued to publish cartoons and illustrations, including those that appeared in Dean’s Gran’pop’s Annual, published by Dean (1935-50), and books published by Birn Brothers (mostly 1946).

Towards the end of his life, Wood retired to Sidmouth, Devon, settling on the edge of the town at Downlands, Salcombe Hill. After a long illness, he died at his home on 26 October 1957.

All Out for Xmas

Leave the Rest to Us

Gran'pop Gets His Own Back After Being Left Out of ...

The Goal in Sight

Gran'pop At It Again The Best Service Going

Gran'pop At It Again You say your assets have ...

I heard that one at the club

It's surprising what it can do

Not Quite a Lady

A Wise Man Knows When to Quit

When Pop Papered the Parlour

Late For the Board Meeting*

The Young Idea 'There's One over There On the Left ...